What is a “Food Desert” anyway? Dive in with us to learn how accessibility, affordability, and information about fruits and vegetables contribute to health and wellness. You’ll learn about food deserts in Los Angeles – what they are, where they are, and where they come from.

What and Where are Food Deserts in Los Angeles?

What is a “Food Desert”

You already know that Los Angeles is home to many different communities, some more affluent than others. You also may know that many neighborhoods do not have a single grocery store, limiting the local access to fresh and healthy foods. The people living in these areas either have to travel long distances to purchase fresh food, or may rely only on the fast food and convenience store options in their area. The lack of access to healthy foods is an injustice, and areas that face this are called food deserts. 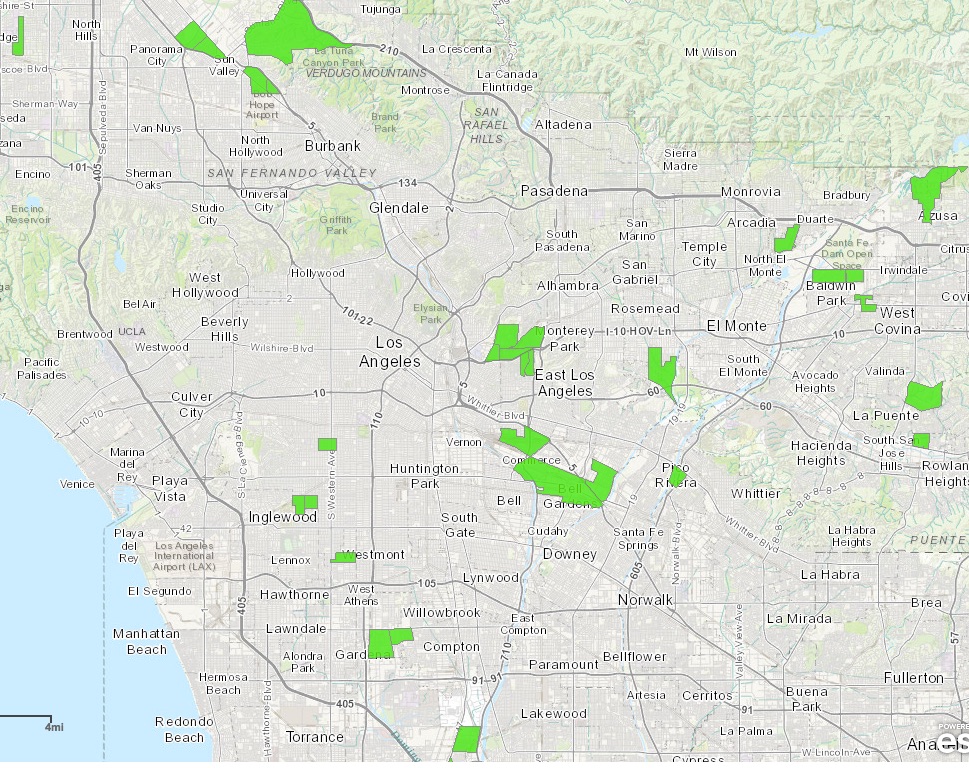 The official USDA definition of a food desert is an area that lacks a grocery store. This is just one definition, and it fails to take into account other social and economic issues that limit access to healthy food. A food desert can also be defined as an area where residents lack the financial capabilities to purchase healthy food because the stores in the area are overpriced. Another contributing component is the knowledge and education needed for purchasing healthy foods. Clearly, availability is not the only factor in determining where food deserts exist. Healthy food needs to be accessible and affordable, and residents need access to information about what food is healthy or not.

Go to a USDA map of food deserts in the United States.

As you can imagine, food deserts have many health-related implications. The USDA maps food deserts based on income and grocery store availability. These areas are also areas where obesity rates spike in the city of Los Angeles, suggesting that less access to produce is a contributing factor for obesity. Fresher food is generally more expensive, it keeps for fewer days, and it takes time and resources to cook. People with low incomes often work longer hours, and finding time to prepare healthy food is often difficult. A study conducted in New York City that tracked who purchased the most fruits and vegetables at supermarkets in low income areas found that poorer families often buy less healthy foods that richer ones, and a bigger gap exists between families with and without a college education.

The truth of the matter is that there is a lack of supermarkets that provide healthy options to the residents of food deserts in Los Angeles, but there is not a clear reason why. Supermarket chains avoid low-income areas for many reasons. Often, they anticipate that the residents cannot afford to purchase their products, or that the residents do not have the education to understand the importance of healthy eating. In addition, supermarkets do not expect residents to change their buying habits just because a supermarket opens in the area. Other factors that deter supermarkets are high crime rates and unsatisfactory transport infrastructure (like a majority of residents not owning a car), which are common in low-income areas.

There is not a clear answer as to why there are no supermarkets in food deserts, but the low average income is probably a significant factor. Blame cannot simply be placed on grocery stores that choose not to locate themselves in food deserts. The educational component falls upon the government, and purchasing healthy foods is ultimately the responsibility and choice of the consumer.

Food Deserts in the United States

Food deserts are not specific to Los Angeles. The unavailability of healthy food is an issue that plagues many cities in the United States. A peer reviewed study that gathered global statistics on food deserts from 1996-2007 drew strong conclusions about the United States. Overall, geographic areas with a high proportion of low-income or African American residents were underserved by food retailers. The average distance to supermarkets was farther for low-income areas and areas with a high proportion of African Americans. Lastly, these same areas had more convenience stores. These trends illustrate that food deserts are not just a local issue, but a nation wide one.

Despite the widespread issue of food deserts in Los Angeles and in the United States, there are solutions. Public policy attempts show lots of potential. They have the ability to decrease price disparities between unhealthy and healthy foods and facilitate the entry of supermarkets into low-income areas with subsidies. For example, Los Angeles just passed an ordinance mandating EBT readers at all Farmers Markets in the city. Good policy can also encourage the development of grocery cooperatives and bring farmers markets to neighborhoods. These efforts will combat both availability and cost of healthy foods. Advertisements and awareness campaigns that encourage healthy foods can help address the information gap.

Food deserts are a huge issue affecting Los Angeles, but we can work to end them. Food Forward helps to increase people’s access to fresh and healthy foods by connecting the abundance of produce in the city to people in need.

This piece was written by Catherine Achy, one of our amazing student interns from UCLA.