In 2012, the NRDC released a report titled “Wasted: How America is Losing Up to 40 percent of Its Food from Farm to Fork to Landfill.” This report had some of the first national statistics on food waste — it’s where that familiar “40% of all food produced is wasted” statistic comes from. The authors outlined the costs of food waste, from economic losses to resource inputs to greenhouse gas emissions. The report also helped to get a lot of people thinking about food waste, the choices we all make, and some solutions to the problem. Last year, the follow up to the 2012 report was published with new data, gaps identified, and solutions. We thought we would update our food waste resources with these new findings. 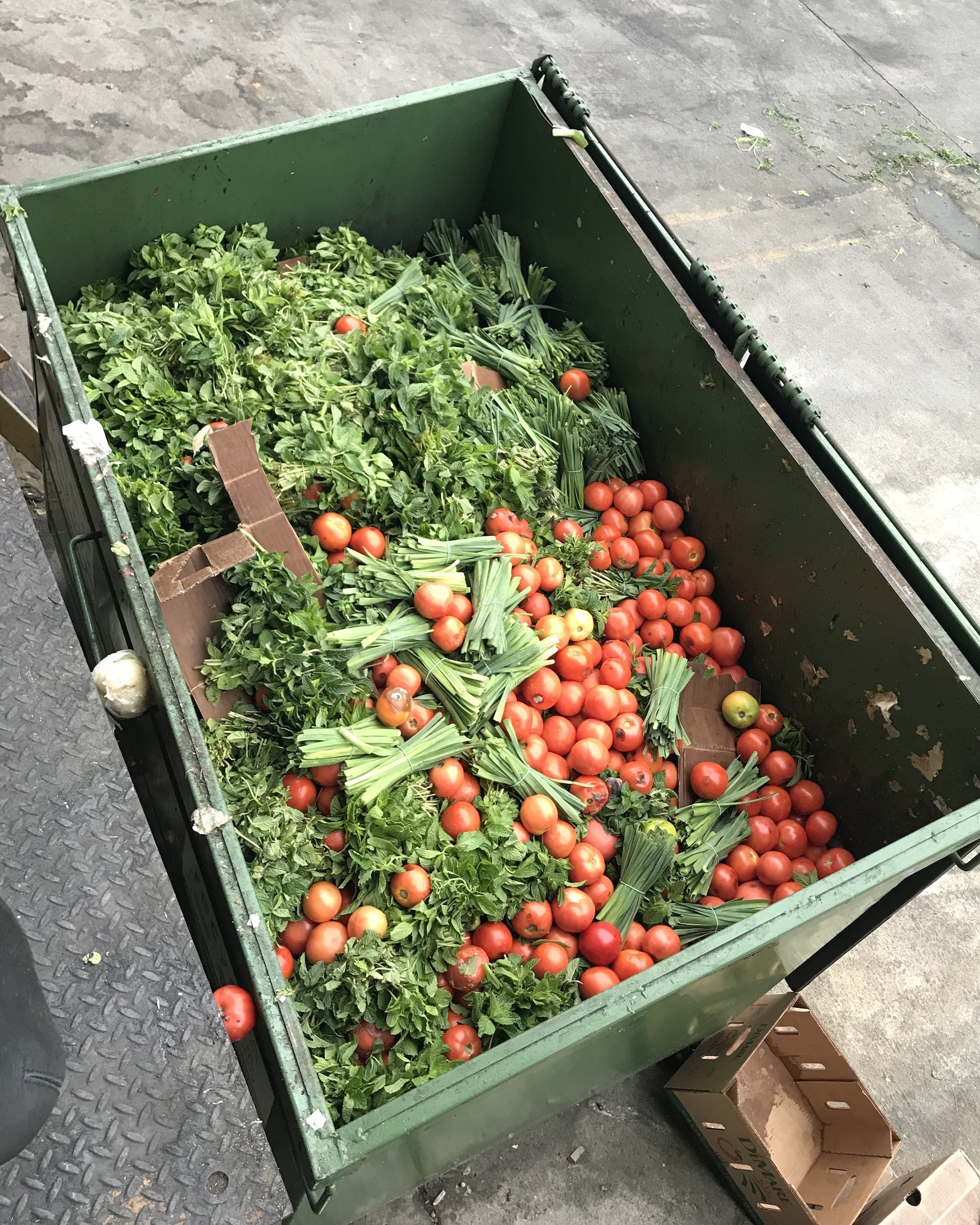 Beautiful vegetables sit in a dumpster at the LA Wholesale Produce Market. Up to 5% of food is
rejected outright by buyers at wholesale markets.

Since the 2012 report, much more research has been done on the topic of food waste, and the Food Loss and Waste Protocol created standards for quantifying food waste, making data comparison a possibility. Following the release of the report, the United States Department of Agriculture (USDA) and the Environmental Protection Agency (EPA) set a goal to cut food waste by 50% by 2030, nationwide. The EPA states that it plans to work with food system leaders across multiple sectors to promote action and improve tools for reducing waste. The EPA also put out a “Call to Action” to stakeholders and held a Food Recovery Summit, where 6 key activities were defined by participants. Two of the activities were to increase public awareness and build food loss and waste infrastructures, which Food Forward is proud to do every day.

“Wasted” focuses on the environmental consequences of food waste, and breaks it down by impact on our ecosystems and climate.

Water:  We use a significant amount of our freshwater supply to grow food in the United States, and because we don’t end up eating up to 40% of our food, a lot of water is wasted in food production. According to the report, 21 to 33 percent of U.S. agricultural water use goes to food that is ultimately wasted.

Land: Similarly, we need land to produce food, yet much of that food never makes it to a table. About 18 to 28 percent of our viable cropland is attributed to growing wasted food.

Landfills: Go to any landfill and you will see a lot of food that Americans throw away—21 percent of municipal solid waste, to be exact. We send more food to landfills and incinerators than any other material. On the individual scale, the average American tosses 210-250 pounds of food annually, or about 720 calories per day.

Climate: All throughout the production chain, we use energy, create fertilizer runoff, and emit carbon as we grow, process, and transport wasted food. Each of these links has consequences for our climate system, including the final destination of uneaten food. When food goes to landfills, it cannot decompose naturally (as it would in a compost pile), and releases highly potent methane gas. Wasted food is responsible for at least 11 percent of all landfill-generated methane emissions, a conservative estimate.

Food is wasted at every stage from farm to table. Up to 20% of the food grown is never sold due to cosmetic or size standards.

The NRDC report also outlines where food is wasted at each stage in the production chain. It all starts on the farm: the USDA estimates that about 4 percent, or 66,500 acres of planted crops are left unharvested each year. And even more produce is rejected due to cosmetic standards. A study in Minnesota found that up to 20 percent of fruits and vegetables are too large, small, or don’t otherwise meet cosmetic standards, and thus aren’t viable.

Manufacturing and processing food (such as canning, freezing, drying, and precutting) creates about four percent in food losses across all types of food. Produce processing is actually quite efficient, and does not produce a significant amount of wasted food. In addition, many food processing operations divert their food scraps to become animal feed or other nonfood products, such as compost.

Food is also wasted at the distribution stage, due to improper transportation and handling or outright rejection by buyers. Another 2-5 percent of all food products are lost because buyers reject shipments due to cosmetic imperfections, surplus, or other issues. At the downtown LA Wholesale Produce Market, our Food Forward team works to circumvent these losses by identifying these rejected shipments and pairing them with one of our regional hunger-relief agencies.

The food that has made it past all of these stages is ready to be sold in a supermarket—but 10 percent of it, or 43 billion pounds, will never make it off the shelf. For produce, about 12 percent of fruit and 11.5 percent of vegetables are never sold after making it to the grocery store. 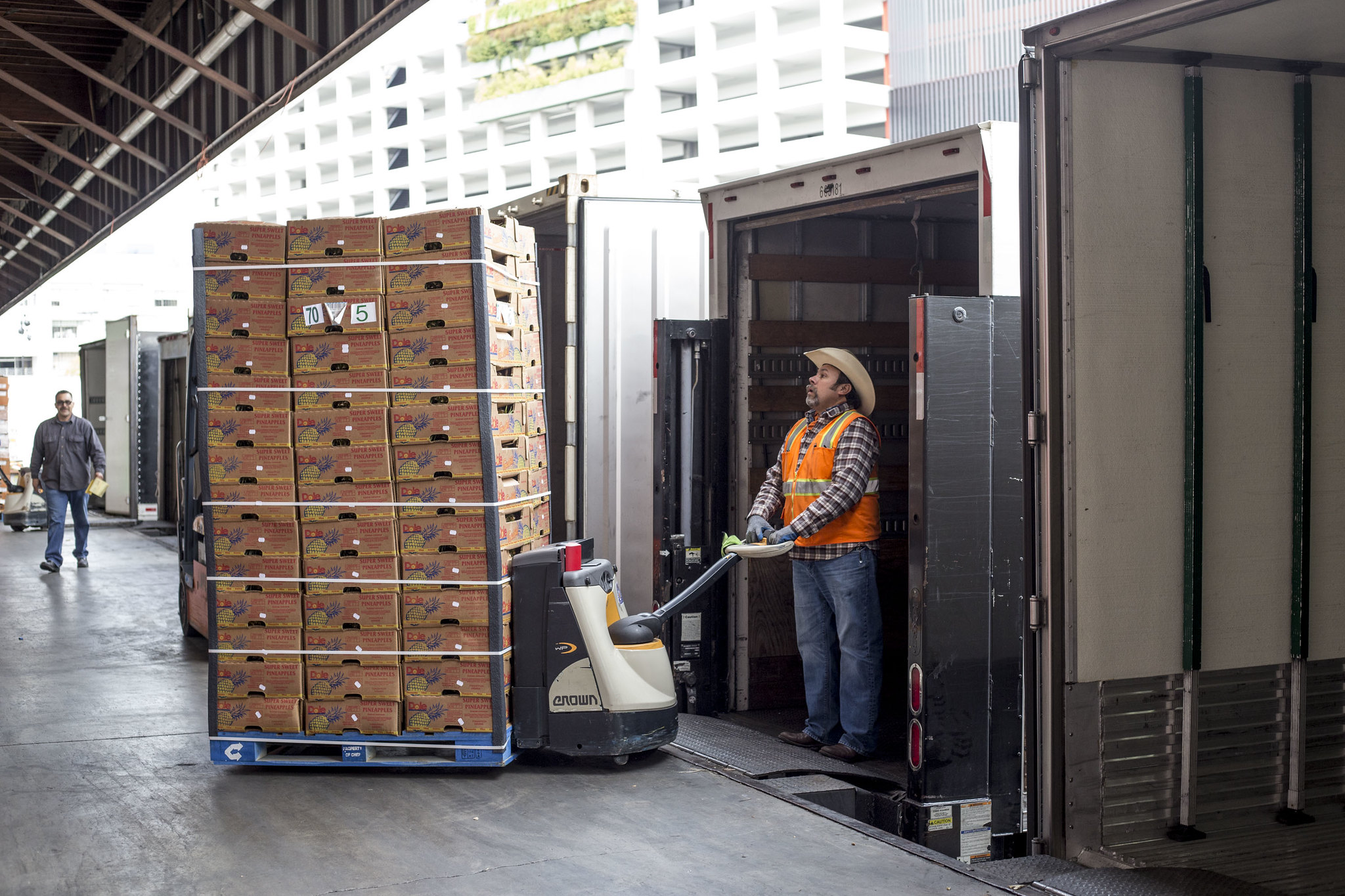 What can we do?

There are many losses and inefficiencies throughout the production chain, and it can feel daunting to figure out how to have an impact on such a huge system. However, it turns out that individual consumers are responsible for most food waste compared to all other actors in our food system. Consumers waste about 21 percent of all food produced, a total of 90 billion pounds in 2010. Not only is this a huge amount of food, but the resource footprint of food wasted at this late stage is much greater, due to inputs from growing, transporting, and storing the food. One study estimated that food wasted at the consumer stage carried eight times the energy waste of food wasted on the farm. So while there is a lot of food wasted before we even see it, we can make a huge difference by simply changing how we buy, store, and use food.

We can also be creative in how we approach the issue of food waste. At Food Forward, we are redirecting fresh fruits and vegetables from the landfill to people. Other organizations work to increase composting in their communities. There are many examples of products made from food headed for the trash.

40% is a big number, and the ramifications of that amount of food waste are clear. But within this issue of food waste, there is so much possibility, so many opportunities to do more and be better. We can feed people, create closed-loop systems, and bring communities together. We hope you’ll join us! 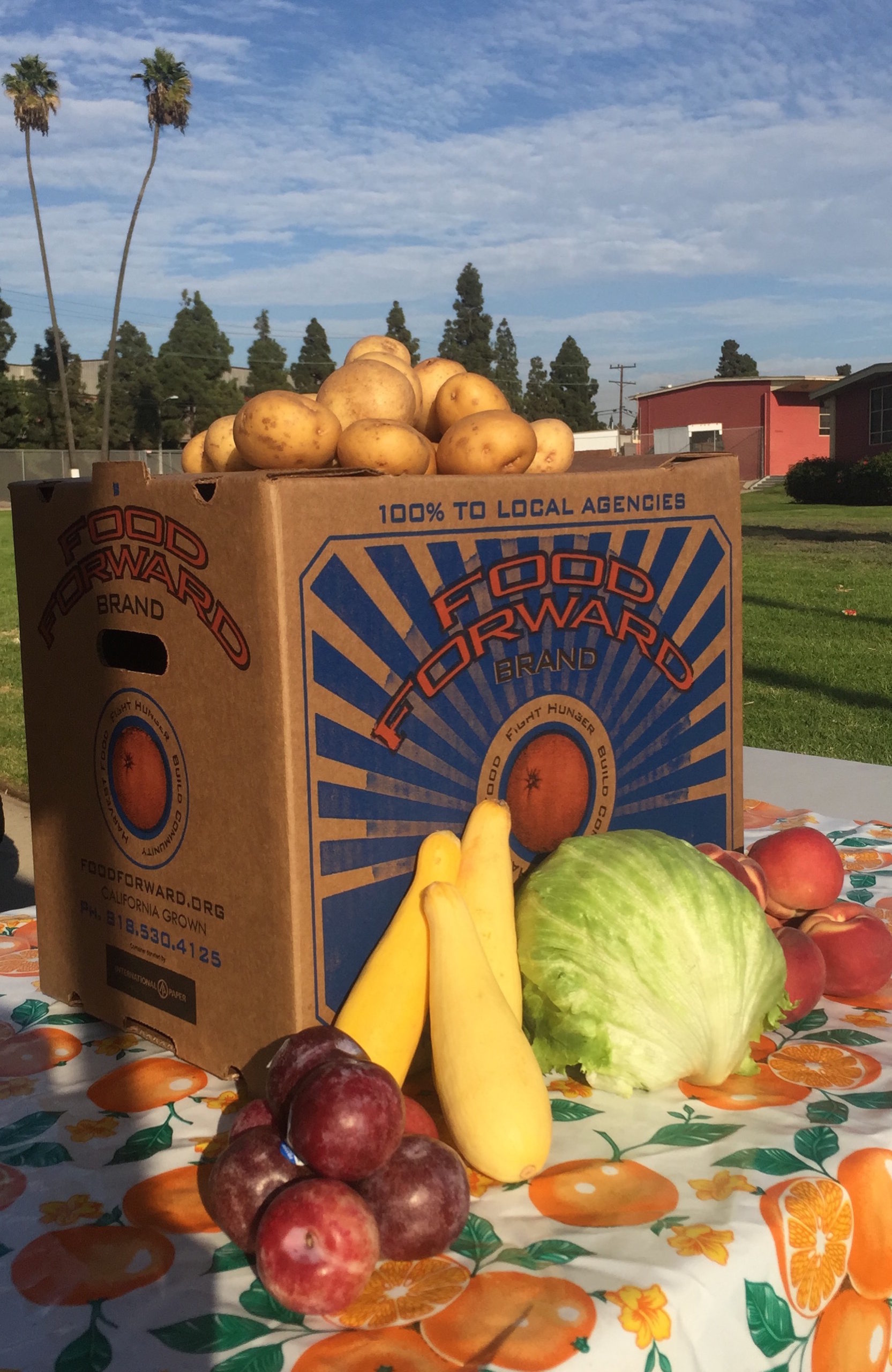 One use for food that doesn’t make it to the store? Free distribution to community members, like this
assortment of fruits and vegetables that went home with families in Inglewood.